Chagas is a disease caused by a parasite that is spread by the bite of triatomine bugs (more commonly known as kissing bugs, reduviid bugs, cone-nosed bugs, or blood suckers). Chagas is primarily found in Central and South America and Mexico. Chagas has been found locally in Arizona, but it is very rare. There is some evidence of spread between insects and animals in parts of the southern U.S. 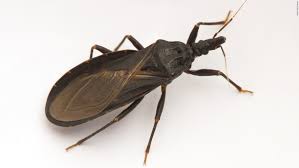 Chagas is spread primarily through kissing bug bites. Chagas is spread to people when the infected kissing bug poops while biting. If the kissing bug’s poop is rubbed into the bite wound or into a mucous membrane (for example, the eye or mouth), the parasite can enter the body. These bugs generally bite at night while people sleep.

Chagas can be spread in other ways, too. Chagas can also be transmitted from a pregnant woman to her child, from infected blood or organs during transfusion/transplant, and potentially by ingesting food or water contaminated with kissing bug poop.
Chagas disease causes two different stages of illness:

No acute symptoms in most people. Symptoms are often absent in the acute (initial) stage. In some cases, individuals may have a wound at the site of the bite and they may have swelling of the eye or eyelids if that is where the bite occurs. Fever, headache, general discomfort, difficulty breathing, and swelling of the lymph nodes may also be present. Rarely, the early stage of the infection can be severe and affect the heart and brain.

Chronic illness in some people.  Around 20-30% of untreated Chagas infections progress to a more serious condition, often involving the heart or digestive system.  This condition can lead to sudden death due to heart failure.  Immunosuppressive conditions such as HIV/AIDS can increase the likelihood of progressing to the chronic phase.

Infection during pregnancy can cause illness in some babies. The majority of babies born to mothers infected during pregnancy will have no symptoms, but some babies may suffer from low birth weight, enlargement of the spleen, tremors, seizures, and, in some cases, issues with the heart or brain.

Individuals should see a healthcare provider if they develop the symptoms described above and have visited an area where Chagas disease is found. The provider may order blood tests to look for Chagas disease.

There are treatment options. There are specific medications that are available to treat Chagas infections. Depending on how long an individual is sick for, some medications may be effective in killing the parasite.

Screen household members with similar kissing bug exposure. If there are other individuals living in the same house as an individual infected with Chagas, they should talk with a healthcare provider about testing for Chagas and potential treatment options.

Control insects inside your home. Install or repair window screens and door screens.  Weather-stripping around doors and windows will provide additional protection.  Do not leave doors propped open. Use indoor insect spray throughout the house and along entry ways.

Protect yourself while traveling. People can lower their risk of contracting Chagas while travelling by choosing modern accommodations with window screens and doors screens and other weatherproofing. Avoid sleeping in rustic buildings as they can harbor the kissing bug (thatched roofs, mud-brick, etc.). Avoid camping in areas that commonly have Chagas disease spread.

Protect your family.  If family members had similar exposures, talk with a healthcare provider about testing for Chagas and potential treatment options.